Portfolio: Before and After Sketches

Many of us have a narrow strip of land, about 1 m wide or less, along the side of the house that we don't quite know how to deal with. A simple solution is to allow Agapanthus or another equally undemanding plant species to fill up the available space. This could quite look quite classy, in particular when the plants are maintained to a high standard. But there are ways to achieve classic simplicity with an extra dimension by combining what seems to be the most logical thing to do with narrow spaces, namely planting exclusively in lines, with planting rounded shrubs in pairs or small groups. 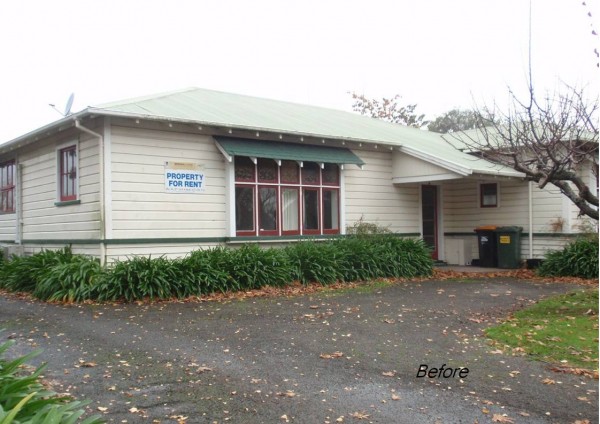 The brief for the scene in the photograph is to suggest an alternative planting scheme for the existing Agapanthus along the house. The owner would like to see something with a bit more variety, a touch of formality, and possibly box hedging. The house itself is about to get a facelift with a fresh coat of paint. 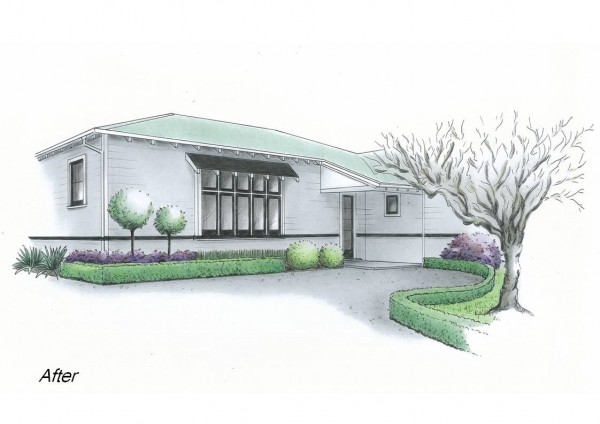 Including a hedge in a narrow bed will accentuate the long, thin dimensions, but when properly maintained, it will give a neat and tidy look. Without a hedge there is an opportunity to plant across the bed, making it appear wider and shorter. Using a hedge along part of the strip combines the advantages of both approaches.

Especially against walls, it is important to have interest at several heights rather than exclusively near the ground. Climbers, naturally narrow-growing shrubs, and topiary standards or "lollipop" plants can be used to this effect. Try to create a balance between the type of plants selected as vertical elements and those for lower-level interest. In the drawing the canopy shapes of the topiary standards are repeated in the two round plants (e.g. Pittosporum tenuifolium 'Golf ball') near the front door.

For the remaining space behind the box hedge, two different groups of plants are recommended as opposed to another row of a single plant species. The purple-bronze leaves belong to Loropetalum chinense 'Burgundy' which can be kept under control with a yearly prune. The narrow upright leaves beneath the window (e.g. Apodasmia similis, also known as oioi) introduce a contrasting shape and texture.

The idea of a hedge along part of the wall flanked by other plants can be repeated on the side of the house. Here the planting scheme could for example begin with a group of small flaxes and one or more rounded shrubs near the front corner of the house, then a hedge, and finally a similar grouping of flaxes and round shrubs.

The scene is finished off with a box hedge following the curve of the driveway. This not only gives a neat separation between lawn and drive, but also adds a strong free-form line to counterbalance the straight lines of the rest of the garden and the house.